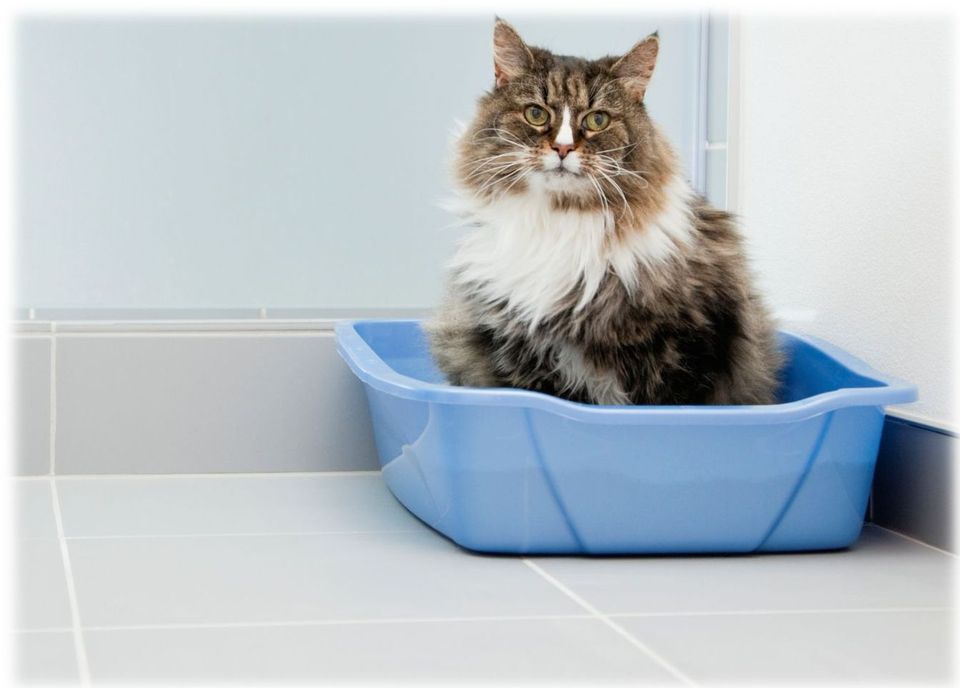 Feline house-soiling problems are among the most common behavioral problems encountered. There are many reasons why cats eliminate outside of their litter box ranging from medical (e.g., urinary tract infections, kidney disease) to behavioral (urine marking, inappropriate urination/defecation). A detailed history, physical exam, urinalysis and possibly bloodwork are important tools we use to determine the underlying cause, enabling us to select the most appropriate treatment option. This handout concerns behavioral reasons for feline inappropriate elimination. If the problem appears to be behavioral, there needs to be a distinction made between marking behavior and inappropriate urination/defecation.

Urine Marking (spraying) is a specific form of inappropriate elimination. Urine marking is a normal form of communication among cats. Though it is most common in intact (un-neutered) male cats, any male or female cat can spray. Urine marking is often associated with a standing posture with catâ€™s hind legs straight and tail up. In addition the tail is usually quivering and the urine hits a vertical surface. Treatment of urine marking involves trying to identify the stimulus and removing it if possible. Urine marking may be due to territorial behavior, sexual behavior, reactive behavior or anxiety/stress. Examples of stresses are: moving to a new house, a new person or baby in the house, a new pet in the house, or a new cat in the neighborhood. The targets for urine marking are often the perimeter of the territory or other socially significant items such as the ownerâ€™s clothes.

Any cats with urine marking behavior should be spayed or neutered. In addition to removing the underlying stimulus for spraying, one can make the soiled area aversive by placing aluminum foil over the area. The environment can be treated with a facial pheromone (Feliway). The soiled area should be cleaned with and enzymatic cleanser.

Inappropriate urination/defection (not related to urine marking) can occur due to litter box aversion, location aversion or substrate preference or location preference. It is important to note where the eliminations are taking place and on what type of surface. The goal is to make the litter box more attractive Cats are very individual and often have specific preferences.

The golden rules of the Litter Box:

If a cat seems to have a location preference and eliminates in one particular area, you can try placing the litter box there for one week. If the cat uses the litter box in the new areas, then gradually move the box a few inches every day closer to a location that is a mutually desirable.

In some multiple cat households, there may be a conflict between two cats that can build to litter box avoidance. In these situations there is usually an aggressor (the cat who starts trouble). A collar with a bell can be placed on this cat to allow the other cat (or cats) the opportunity to avoid the aggressor. This is also demonstrates the importance of having open litter boxes, since the cat in the box canâ€™t be snuck up on and disturbed.

If there is no success with the above recommendations, you may need to consider confining the cat to a small area (e.g. bathroom) with food, water and a litter box. This will limit the catâ€™s options and help force the cat to use the litter box. Once the cat begins to use the box regularly, gradually give him more freedom.

Unfortunately cat behavior is complicated and there are situations where behavior modification alone does not work. At this point drug, consultation with a behavior specialist may be helpful. Anti-anxiety therapy may also need to be considered. For some cats, medications dosage can be reduce or eliminated if the pet is responding; other cats may need long-term drug therapy.

In summary, inappropriate elimination problems can be very frustrating. It is important to distinguish between medical and behavioral causes, as the treatment strategies are different for each. For cats with behavioral issues, it is also important to distinguish urine marking from inappropriate urination/defecation, as knowing the underlying cause may aid us in solving the problem.

Emergency or Urgent Care Fee will apply when appropriate during and outside regular business hours.

To provide the highest quality medical care, grooming, and boarding services for companion animals, keeping in mind the sensitivity and individuality of the pet along with the emotional and financial needs of the client.